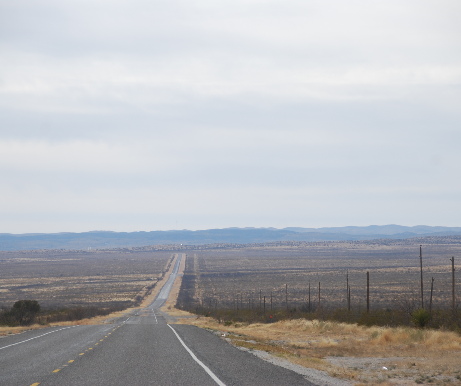 I was sitting in the passenger seat of my friend’s old car, dazed from watching miles and miles of pale, flat brush land go by when, without warning, the car swerved and landed in a shallow ditch on the side of the road. I looked around, trying to find the cause of our derailment. Given that we’d seen nothing but dust and cactus for miles I couldn’t imagine what it might have been: a coyote, perhaps, or a bit of barbed wire that had blown onto the road.

“It’s an oil well,” my friend said, pointing. Sure enough, a small, rusted old thing was slowly moving up and down in the distance. She had driven the car off the road, it transpired, because she had never seen one before. Neither had I. We were nineteen years old, born and bred in Texas. We began to realize that we’d missed out on some essential component of the state that were only then discovering. It was November 2009 and we were making our first journey out West. 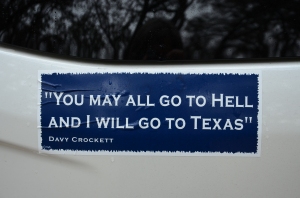 We drove down I-10 in that old suburban packed with flare guns, bear spray and hunting knives we never dared open. I served as navigator, curator of country music, and vigilant patroller of my driver, who was prone to creeping up to over 100 miles per hour when I wasn’t paying attention. The state Sheriffs often noticed before I did. Somewhere near the middle of nowhere the terrain changed to a more rugged landscape that rose into mesas and dipped into canyons, covered with low brush. It continued to change, at times verdant with plants we had never seen before, at times a dusty plain. As we neared West Texas the earth got lower and the sky got bigger. The air took on the ranch-flavor of dust, horses and impending rain. We felt like we were escaping something.

A few hours into our trip the land was so flat and we’d listened to ‘Friends in Low Places’ so many times that we started counting road-kill to keep engaged with what I called the ‘nothing-nowhere-ness’. We didn’t know the names of the new plants we saw, so we started naming them ourselves. Somewhere near a sign for ‘Iraan’ we turned down a side road in hopes of finding a gas station for our dwindling tank, but were soon driven back to the highway by a smell of sulphur that intensified as we made our way down the road. Around high noon we spotted our first tumbleweed, which I admit I had previously believed to be a myth invented by Spaghetti Westerns. A large white sign with black lettering that bore the bold message “We need to talk – God” only drove home the fact that neither of us had any idea what we were getting into. When Bob Dylan’s ‘Beyond Here Lies Nothin’ came on, we felt that truer words had never been spoken.

Morning light ✨
These daily romances, rose bouquets and pink china tea cups, champagne coups and candlelit dinners, waltzes through the living room and games of hide and seek.
Picking wildflowers and reading fairytales whilst my husband is toiling away in the vineyard. I don’t think I always have the easier job (while, say, tending to 3 am stomach bugs like this morning), but moments like these are rather nice 🌸
Mornings with the old oaks, the golden grasses, the winds of spring and the budding blossoms. Mornings like the Saturday mornings of childhood, barefoot and ready for two days of delicious solitary adventures into the unknown corners of the most well known places. Never solitary now, but always half wild with my little wild ones 🌿
The light on a rainy morning, the glint of candlelight on antique brass, the label of my husband’s ancient Calvados, the grapes he bought for our daughter 🍇
Giveaway 🌿 I’ve partnered with three of my favorite creators to give away a matching set of enchanting William Morris goods from @_winifredj_

© Gretchen Greer, 2017. Unauthorized use and/or duplication of this material without express and written permission from this blog’s author and/or owner is strictly prohibited. Excerpts and links may be used, provided that full and clear credit is given to Gretchen Greer with appropriate and specific direction to the original content.
Loading Comments...
Comment
×