[Today’s story is a guest post by a dear friend of mine, Kate.]

I once heard it said that you could tell the quality of a leather shoe by the sound it makes when stomped. The man standing next to me in Inverness must have paid a lot for his shoes, and he was stomping for every penny.

It was a dark and misty night, typical of a Scottish evening, when the only two good places to be are in bed or in a pub. I chose pub, returning to one I’d been to before. It was packed with people of all legal drinking ages, all there for the music (and to drink, sure, but tonight that came second to the music).

A small stage had been erected in the front window, where something written on the glass was becoming more visible as the room steamed up. When we arrived the night was still young, and few had taken to the dance floor. I stood, listening to the music, and gradually moving in to dance, to feel the freedom that comes from dancing in public.

The steps were simple and the music worked like a medicine. Soon I was stomping and clapping and reeling with all I had. I couldn’t stop smiling and laughing, my hair flying out around me. I felt like a part of the music, a part of the joy it was imparting, and I hoped that I served as the dancing feet for those who did not, or could not, rise to join.

Nearby, the young men who had started the dance by sweetly coaxing older ladies out to the floor stood and watched. One of them was tall and handsome, and, lacking the boldness to do it myself, I suggested my friend invite him to dance. 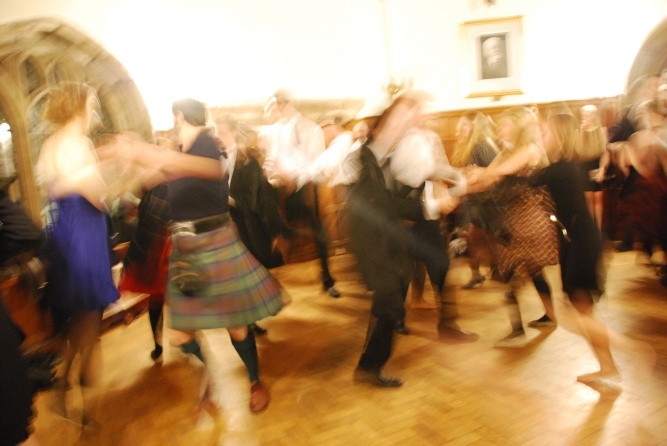 He joined us and took charge of the floor, pulling us into circles where we took turns dancing alone at the center. When it was his turn, he drew me in with him. He looped one arm around my waist, pulling me to him so our hips were touching, and his other hand grasped mine to extend out, unfortunately hitting another dancer in the nose.

He played the mishap off gracefully, and soon my laugher died down enough for him to speak. His name may have been Lewis, and he might have been disappointed to hear that it was my last night there, bless him. I don’t remember what else was said, but our eyes were saying more, and that conversation was more compelling.

But before he and I could dance again, the friend I had come with ducked outside, and I faithfully followed. The music stayed with me all the way home.

The next morning I stood by the bank of the swollen river, chin in my hand, thinking of the night before. On the opposite bank a church bell tolled. Upon my arrival in Inverness, I had altered my plans to leave a day early, fearing another isolated day of solitary travel. Now I couldn’t help but think what might have happened if I still had that extra day.

But adventure waited ahead, as always. I can still hear the music, still feel the freedom and joy in my heart like a well-creased letter from a friend that you read again and again. I know I’ll return to Inverness, I’ll dance, and I’ll have partners, whether or not they’re named Lewis.

Wishing you all a light heart and playful spirit today and all days 🌸
A little romance 🌸
To soak in the details of every day, to take pleasure in food and wine, flowers and sunlight, to find beauty in cooking and groceries, laundry and cleaning, to gaze at my children in the morning light and dance with them in the evening, to deeply cherish my husband and parents and dear friends and family, to live life with a sense of lightness and joy and appreciation, whatever it’s season 🌸
Fraise des bois for my daughter, Victorian glasses etched with stars from my husband’s mother, golden cider and peonies in full bloom on a warm spring evening ✨
Growing up we went for tea at three every Sunday at my grandfather’s house, and it was a ritual so engrained I still think of him every week at that time. Since having children I’ve loved creating rituals of our own - flower shop visits, evening dances by candlelight in the winter and with the windows open in the spring, certain songs listened to on certain days, crêpes on special mornings (or any morning we want to make special).
Windows thrown open to the cool courtyard and perfumed irises, the last of the wisteria blossoms and the quiet of hot spring afternoons 🌸

© Gretchen Greer, 2017. Unauthorized use and/or duplication of this material without express and written permission from this blog’s author and/or owner is strictly prohibited. Excerpts and links may be used, provided that full and clear credit is given to Gretchen Greer with appropriate and specific direction to the original content.
Loading Comments...
%d bloggers like this: