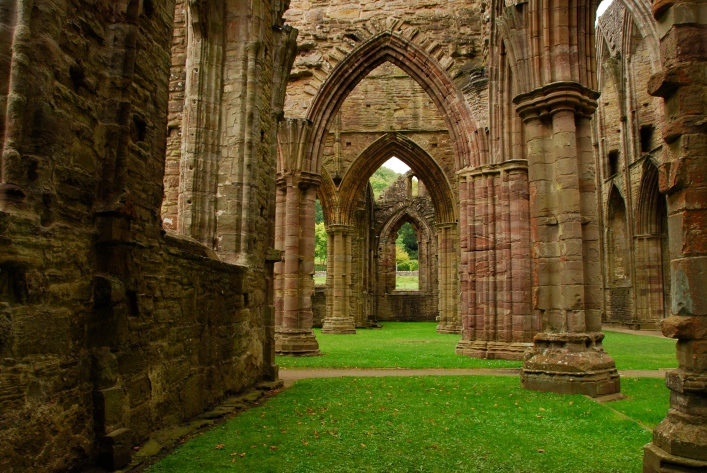 Five years have past; five summers, with the length Of five long winters! and again I hear These waters, rolling from their mountain-springs With a soft inland murmur.—Once again Do I behold these steep and lofty cliffs, That on a wild secluded scene impress Thoughts of more deep seclusion; and connect The landscape with the quiet of the sky. – from ‘Tintern Abbey’ by William Wordsworth

Three years have past since I went on a three-week long ramble through England as a prelude to moving back to Oxford. I visited Tintern on one of those moody, damp, overcast days that makes lines sharper and colours more vivid. I wandered through the Book Room into the sudden, unexpected majesty of the main transept. The grassy floor was charmingly speckled with daisies. The scale of the structure is such that wandering figures are rendered small stokes of darkness. The heavy columns seemed to brush the low-hanging sky.

The colours of the structure and overgrowth, green and autumnal red, were mirrored in the changing leaves of the hillside trees, visible through the crisp edges of the remaining windows.

Certainly, the abbey would have been spectacular intact, but its ruined state lends Tintern a peculiar enchantment of another kind. The natural and built have elided during centuries of abandonment, so as to appear indistinguishable. It is as though the columns grew hundreds of years ago, as though the grass and daisies were set down by a human hand.

The effect was enhanced by a hint of sun that came through the windows, bright and unimpeded by stained glass, falling on grass rather than stone. 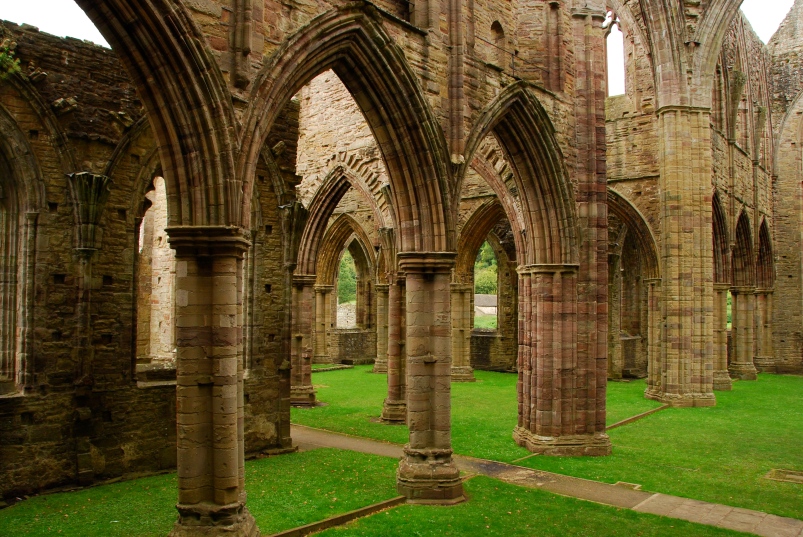 © Gretchen Greer, 2017. Unauthorized use and/or duplication of this material without express and written permission from this blog’s author and/or owner is strictly prohibited. Excerpts and links may be used, provided that full and clear credit is given to Gretchen Greer with appropriate and specific direction to the original content.
Loading Comments...
%d bloggers like this: